In the October 2013 issue of Child Poverty Insights Dr. Kitty Stewart and Ms. Kerry Cooper from The London School of Economics discuss a review of evidence on the relationship between household financial resources and children's outcomes in richer countries.

The review, initiated by The Joseph Rowntree Foundation, more specifically seeks to answer if raising household income itself makes a difference to children's outcomes, or if it would be better to focus on investing in schools or improving parenting skills.

Email your suggestions for future Child Poverty Insights topics to the editors of the series, Martin Evans and Therese Sonesson at cpn@unicef.org

In the September 2013 issue of Child Poverty Insights Davide Rasella from Federal University of Bhaia in Salvador, Brazil, discuss the positive results from the Brazilian Social Protection programmes - Bolsa Familia and the Family Health Program.

The study provides evidence that a multi-sectoral approach composed of a large-scale conditional cash transfer program acting on social determinants of health, with an effective primary health care program attending basic health demands of the population, can substantially reduce childhood morbidity and mortality from poverty-related diseases in developing countries.

Email your suggestions for future Child Poverty Insights topics to the editors of the series, Martin Evans and Therese Sonesson at cpn@unicef.org 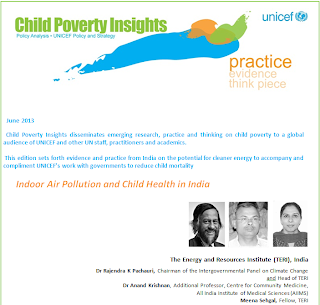 In the June 2013 issue of Child Poverty Insights Rajendra K. Pachauri and Meena Sehgal from The Energy and Resources Institute (TERI), and Anand Krishnan from the All India Institute for Medical Sciences, highlight the adverse effects of indoor air pollution on child health in India, and set forth proposal on the potential of cleaner energy for the reduction of child mortality. 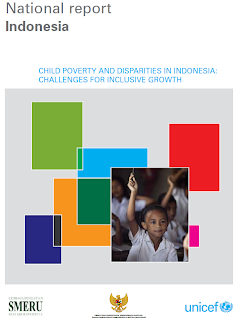 The Indonesia Child Poverty Study is the result of an intense undertaking and collaboration between SMERU Research Institute, the Ministry of Planning and UNICEF. It is the first Child Poverty Study undertaken in Indonesia and has raised the interest of many Government, NGO, donor, academia and other partners.

It will be one of the studies used by the Government for the preparation of its next Five-Year National Plan and 25 year Poverty Reduction Plan and has been presented at various forums at the national, sub-national and international level.

The Study is currently being updated by SMERU for UNICEF and the update will also be further shared with colleagues. 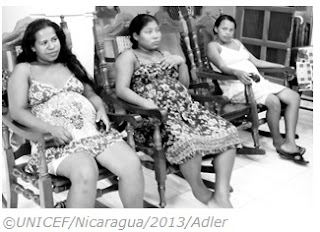 “Boring...” That was my first reaction after spending the night at a ‘casa materna’ in rural Nicaragua. There wasn’t much for the other women – who had come to access the regional capital’s superior maternal health services – to do. There was a lot of sitting around. Most women were too shy to talk to one another. Others just missed their homes.

I felt guilty at my reaction. These maternal houses were, after all, superb facilities that help rural women have free pre-natal exams and deliver their babies in a safe environment. Was it unfair to talk about boredom when money is scarce? Shouldn’t these women be content to just have these services? From a Human Centered Design perspective, the answer is simply no.

At UNICEF Nicaragua, we have introduced ‘design thinking’ into policy-making. The concept invites us to look at public services as designers. To focus on the experience of service users as a departure point for improving these same services, and therefore their impact on people. So when we teamed up with the government at the Northern Autonomous Atlantic Region (RAAN) in Nicaragua to develop a regional policy for children, we seized on the opportunity to use this innovative approach to support the rights of kids in the region.
Read more »
at 7:41 AM 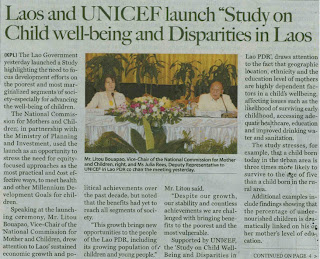 The Lao Government recently launched a Study highlighting its recognition of the need to focus development efforts on the poorest and most marginalized segments of society – especially for advancing the well-being of children.

The National Commission for Mothers and Children, in partnership with the Ministry of Planning and Investment, used the launch as an opportunity to stress the need for equity-focused approaches as the most practical and cost effective ways of meeting health and other Millennium Development Goals for children.

Speaking at the launch, Mr. Litou Bouapao, Vice-Chair of the National Commission for Mothers and Children, drew attention to Laos’s sustained economic growth and political achievements over the past decade, but noted that the benefits had yet to reach all segments of society.

“This growth brings new opportunities to the people of the Lao PDR, including its growing population of children and young people,” Mr. Litou said in her opening remarks. “Despite our growth, our stability and countless achievements we are challenged with bringing benefits to the poorest and the most vulnerable.

Supported by UNICEF, the ‘Study on Child Well-Being and Disparities in Lao PDR’, draws attention to the fact that geographic location, ethnicity and the education level of mothers are highly dependent factors in a child’s wellbeing, indicated by issues such as the likelihood of surviving early childhood, accessing adequate healthcare, education and improved drinking water and sanitation.

A number of countries around the world are faced with the increasingly high costs and regressive nature of fuel subsidies but are struggling with their reform given likely negative impacts on well-being. In Ghana, the government recently removed the majority of the subsidy on fuel and scaled up its funding to social protection, including a tripling of the budget allocation to the national cash transfer programme.

Analysis proves that subsidies on petrol are regressive, with 70% of direct benefits accruing to the wealthiest quintile on average in Africa, while less than 3% of direct benefits are received by the poorest 20% of households*. Conversely, we know that many direct social transfer programmes are far more pro-poor - Ghana's national cash transfer programme (LEAP) is one of the better targeted with 75% of its benefits reaching the poorest two quintiles.

As national debate mounted after the elections, and the preparation of the 2013 budget was underway, Ghana's new government chose to remove the majority of the subsidy on fuel (petrol and diesel in particular), thereby avoiding a cost to the budget of well over
1 billion USD in the year.
Read more »
at 10:52 AM